Have you noticed that everything is awesome and epic? Every time someone post a new video of a dog doing something or a cat being a cat they claim it to be epic, the best, most funniest video ever… a must see…. 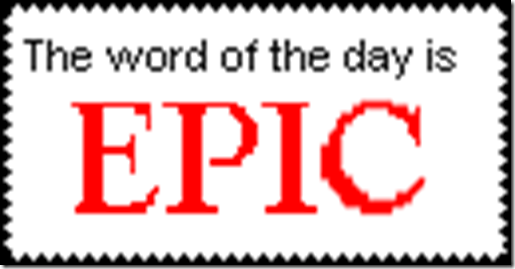 Can every video of very baby and every dog, or better yet, every baby with a dog be epic? Do we not cheapen the word, dilute its meaning? If, for example, a video of an older dog trying to catch a treat, failing each and every time, and finally after like 10 try’s they catch it, and it is called epic, what would we call a video of a dog doing the tango?

Not everything can be epic or awesome, something’s are just cute of funny and believe it or not, something’s are just plain and simple stupid and not epic, awesome or funny. Yet we seem to feel that we must label our video or posting as such, for fear that if we don’t someone may think we are not an epic as they are or an awesome and their other friends.

We seem to live in a world that needs constant pat-on-the-backs to feel relevant. Seems kind of silly to me that a posting can make someone feel relevant or not, but trust me, it does. Just look at most, if not all of your postings from friends, especially if you have friends in their 20’s or younger. Trust me, they base their relevance in the number of likes and comments they get on their posting about their latest epic adventure to the mall.

There was a time when epic had a meaning, a value behind it. Movies like the Ten Commandments and Gone with the Wind were considered epic, moves such as Mr. Smith Goes to Washington and The Christmas Carol were considered classics and movies such and Wasp Women were considered B-Lot classics. Today every movie is described as EPIC…. How can this be? How can everything Hollywood puts out be epic? If everything is Epic, than epic no longer has a value.

We waste our language and words, we misuse them and abuse them. Maybe it’s a sign of old age, maybe I am becoming that silly old man who clings to the past, but to me, it seems that the younger generation has no appreciation for the value of words. Maybe it’s because they don’t communicate, they tweet and text, maybe it’s because the spoken word have more meaning and value than a tweet or maybe its just because they are too lazy to learn the value and we, as adults are too lazy to teach the value.

I remember when I was a kid, back in the 80’s, their use to be a public service announcement about no meaning no. That the word no had a value and that value was to be respected. Maybe we need to start teaching values of words again, that epic is not the same as interesting or cool or fascinating. Maybe we need to re-teach definitions. Yes I know, I just used the word cool, and the value or definition of the cool is not the way I used it. I get it, each generation has its slang, and I am good with that, but what I am getting at is I truly thing we have a generation of kids that truly do not understand the value of words. That they, words, have power and meaning. Typing a tweet or posting an update is not meaningful communication, yet it seems that many of our youth seem to feel that it is. They snap chat, tweet and Facebook, yet they fail to truly communicate. Now don’t get me wrong, I also Facebook and Tweet and LinkedIn, I am on my social networks daily and truly love the interaction with family and friends. BUT and this is a BIG BUT, I do not consider a Facebook posting a replacement for interaction. It is one form of communication but it is not a replacement for face-to-face communication.

The other day my nephew was over for dinner and quality time. We where having a nice conversation over dinner when he pulled out his phone read the message and proceeded to type and them make faces. I asked him if he would rather make faces at his phone than talk to me, his response, I’m snapchating, and I can multi-task. Maybe he can, but that is not the point, the point is respect. When I talk to him I give him my attention, I put down what ever book I may be reading or pause the movie I may be watching or end the conversation on the phone or ask him to wait until I do so. And then I give him my full attention. Yes sometimes the phone rings and I will look to see who is calling, and if need be answer it. And yes sometimes I will receive a text message and check to see who it is from. If I need to reply or answer the phone I will say “excuse me, I need to get this”. Respect…

But I digress, sorry, but in a way it fits in to my topic. The idea of respect is different today. I did ask my nephew if he thought it was respectful of him to chat, text and have a conversation with me all at the same time. He thought nothing of it. They all do it, all his friends. They are never truly 100% engaged in the moment, the conversation, they are always checking Facebook or instant messaging and twitter to make sure they are not out of the loop.

And maybe this is why everything has to be EPIC, maybe because they are fighting for  attention in the digital world. Maybe epic really means, HEY, LOOK AT ME!

All I know is that most of the video’s and posting I read are not Epic or Awesome, they are at best cute or a bit funny but most are just simply stupid. A waste of digital space, polluting our digital world with digital garbage. Sad really, when you think about it. With so much potential to change the world for the better, we use this powerful tool to post Epic videos of cats being cats and awesome videos of dogs doing something… what a shame…

One thought on “The most Awesome post you will ever read, it’s Epic!”