Skip to content
HomeAn Open Letter to all Catholics, to all Americans

This Open letter it to all Catholics, be they liberal or conservative, laps or practicing, fallen away or on their way back home to Rome. In-fact this open letter should be shared with non-Catholics, non-Christians and anyone who is concerned about their personal liberty and freedom. This letter is intended to excite you, motivate you and call you to action. This letter is a letter of protest and a letter of compassion; it is written from my heart and shared with the world. It will, undoubtably contain miss-spellings, bad punctuation and grammatical errors. However, what it will not contain is false emotions and lack of integrity. It will be heartfelt and passionate, it will be my personal views and my faith presented for you and for all.

Revelation 3:16
So, because you are lukewarm—neither hot nor cold—I am about to spit you out of my mouth.

The above quote is the foundation upon I build my letter. The words of St. John in the book of Revelation needs to be in our hearts and on our minds as we read this letter and internalized. It is the basis of all that I have to say concerning the current state of anti-Catholic, anti-liberty rhetoric coming from Washington DC.

The Obama administration continues their attack on Liberty and Freedom; they continue to erode our rights to religious freedom. The latest being their insistence that Catholic Institutions abandon their core beliefs and offer healthcare benefits that cover birth control, sterilization and abortion causing drugs. This is a direct act against our religious freedom and anti-American. (Source)

We, as Americans, as Catholics as a freedom loving people must stand up, speak out and protest this act of religious bigotry. We, as Catholics, are called to do so, by our very baptism, we have been given the responsibility to stand up for and defend our faith and our Church. Yet, all too often, we fail to do so. If we remain still and quiet the Obama Administration will win, not just the healthcare debate, but even more importantly they

will the war he and his administration has waged against religious freedoms.

Our right as Americans and our obligations as Catholics are being challenged and we must respond, and we must respond loudly and boldly. This administration is forcing Catholic Charities, Hospitals and Schools to support and pay for treatments that are counter to our faith, counter to our faith structure. This should shock all Americans, not just Catholics. This is an attack on all Freedoms, not just Religious Freedoms. The Founding Fathers would be shocked to their core and the call for Revolution would once again be heard over this great land. The Founding Fathers fought for Freedom and Liberty, the ability for people to choose their Faith and practices it as seen fit by the faith. They fought for less government and more personal responsibility, not for Big Brother and Government intervention into our daily lives. Healthcare is a personal responsibility and one that the government should not be involved in, but that will be saved for another time. Back to this open letter and the attack on our religious freedoms.

From Bishop Boyea of the Lansing Diocese

These past days have seen a grave error on the part of the federal government, as well as a blessed response from Catholics all across this great state and nation.
By now, all men and women of faith know that the United States Department of Health and Human Services has declared that health benefit plans must include coverage for sterilization, contraception, and abortion-inducing drugs. This unconstitutional and unconscionable mandate is to take effect in stages during 2012 and 2013.
The Catholic Church in the United States will never comply with this mandate. Told that the federal government has allowed a one-year grace period during which the Church can adjust itself to this mandate, Cardinal-designate Timothy Dolan of the Archdiocese of New York responded that the Church does not need a year to determine whether it would comply. He is right. In offering this supposed mandate, the federal government misreads the Constitution of the United States. It equally misreads the determination of Catholics.
This nation is built upon the three-legged stool of the First Amendment. Our precious freedoms of religion, speech, and assembly underlie everything this nation is, and everything this nation has ever accomplished. Religious liberty gives the freedom to preach the Truth. And the truth is that pregnancy is not a disease. Nor is the natural fertility of a woman a disease.
Through the United States Conference of Catholic Bishops and the Michigan Catholic Conference, we are exploring a number of options, including litigation and Congressional reform. As these efforts move forward, Catholics should make clear to their elected officials the crucial importance of religious liberty, and they should pray daily for those who have the responsibility for making these decisions.(Source)

God Bless Bishop Boyea for his strong stance, he truly is a Sheppard of his flock, and I for one am proud to know he is in Michigan and at one time was part of the Archdiocese of Detroit. He speaks boldly and strongly, and his statement should be ours, we, as Catholics, will never comply with this mandate. We need to refuse, to protest and to vote with our Catholic heart and sensibility. We need to let Obama and his administration that he cannot, that no politician can dictate the pillars of our faith, that no mortal man can overturn the laws of God! We will not stand for this and we will, we must, fight back!

It is not only Conservatives or Republicans that should be upset, but Liberals and Democrats, this is not going to stop, the power grab will continue if it is not revered. We will see more laws; more directives infringing upon our Liberates and Freedoms enter into the cause of fairness and equality. The forced secularization of Catholic institutions is neither fair nor equal; it is tyranny in its infancy. It is socialism at its birth and will continue to grow unless we, as Americans, stand and fight! It is time that we rejuvenate our revolutionary hearts and stand for what is right.

Please do not miss understand me here, I am not talking about bloodshed, but I am talking about revolution, a change in the current regime and a return to Liberty and the Constitution. This Administration has trampled this document more than any other has; they have no respect for the Founders and see the Constitution as outdated and in-need of an update, The Constitution 2.0, if you will. Obama himself has stated this:

The President said,”…our Founders designed a system that makes it more difficult to bring about change than I would like sometimes.” (Source) 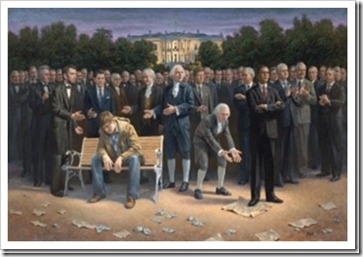 Really, the system Obama is referring to is outlined and detailed in the Constitution… Hmm, How dare the Founders limit King Obama’s power to force his radical and leftist views upon Americans. That is exactly what he is doing with the contraceptive healthcare law being enforced upon Catholics. I know some Liberals and pro-abortionist are hailing this as a victory. However, they should be careful not to celebrate too much, because soon the heavy hand of tyranny will crush your freedoms and liberties, as it is ours. Hold your convictions tight, as Americans; we have the right to do so, and an obligation to defend them. However, be careful and de diligent, the road to socialism is paved with many tempting things. Such as forcing all to accept, for the betterment of all, abortion, birth control and serialization. It promises a nation with “free” healthcare and equality that is not only protected by the government but also guaranteed. The temptations of Utopia are many and they shine and glimmer of in the distance, just like fools gold below the waters of injustice. We all want Equality and Liberty, we all strive for Freedom and Fairness, but as we quest for and search for this Utopia, this perfection of Government and men, we often times forget the men to whom we are governing. Our Nation was designed with one concept in mind, that it is man who gives government its power, not government who gives man its Freedoms. We, as a Nation allow the Federal Government the power to withhold Liberties and Freedoms as a payment for protection of our Liberties and Freedoms. We give them the power, not the other way around. Yet they seem to see it differently, The Obama administration seems to see it as they grant us our Freedoms and Liberties, and in doing so, they rightly feel they have the power to remove, to hold ransom, our Liberties and Freedoms. As long as we allow them to feel this way, as long as we do not stand and fight for our Freedoms and Liberties, they will continue to act as if they have the power over us, and not as our Founding Fathers intended, we have the power of them. It is our Government, we created it and we can destroy it or we can restore it! What will it be? This is a defining moment in our history; this is a turning point for our Great Nation. How will we react?

Revelation 3:16
So, because you are lukewarm—neither hot nor cold—I am about to spit you out of my mouth.

I for one am going to stand and Fight!

2 thoughts on “An Open Letter to all Catholics, to all Americans”