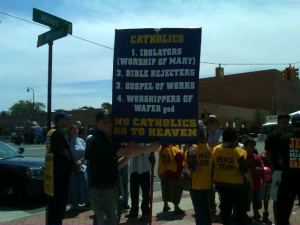 A young Muslim girl broke down in tears after passing by a group of Christian missionaries who continued to yell insults Saturday at Muslims and others during the Arab International Festival in Dearborn. The missionaries are also now targeting Catholics.

“She’s crying because of what they said,” said the father of the young girl who cried after hearing the missionaries on Warren Avenue in Dearborn, as depicted on a You Tube video. The Arab International Festival, which continues today, is the largest outdoor gathering of Arab-Americans in the country and so has increasingly attracted Christian missionaries who believe Islam has taken over the city of Dearborn.

Quran-burning Pastor Terry Jones canceled plans to speak against Islam at the Arab Festival after a crowd of protesters blocked him, but other Christian missionaries attended. One of them called themselves the Bible believers and railed against Arabs, Muslims, and Islam, through a bullhorn. They held up a sign calling Islam’s prophet a “pervert.”

And on Saturday, they insulted Catholics too, holding up a large sign that read Catholics are “idolaters … Bible rejecters…and worshippers of wafer god,” according to a photo taken by Haroon Mihtarand posted on Twitter.

Saturday’s attacks against Muslims and Catholics came after Friday’s rally by Jones at Dearborn City Hall, where speakers railed against both Muslims and African-Americans. One supporter of Jones, Rabbi Nachum Shifren of California, assailed Muslims and black people during his talk on the steps of City Hall. Jones and his supporters have also attacked gays and lesbians in their talks. Last month, Jones led a rally in Texas against what he said in a news release were three evils confronting America. “Homosexuality, Abortion, and Islam.”

Christian missionaries have attended the Arab Festival for many years, but over the past two years, some of them have become more confrontational, said organizers. Two years ago, a group called Acts 17 that attended the festival produced a video of them getting into a dispute at the festival that has drawn more than 2 million views. Some Christians say the video shows that Islamic law, sharia, has taken hold in Dearborn; but city officials and local church leaders say it was selectively edited to defame Dearborn.

The co-leaders of Acts 17 say Islam is a false religion that is inherently violent. Last year at the festival, some of its members were arrested; a jury later acquited them of charges they were breaching the peace, but one was found guilty of failing to obey a police officer.

The spread of that video has turned Dearborn into a magnet that attracts some Christians to the city during the festival as they attempt to stop what they think is the spread of sharia. Another evangelist, George Saeig of California, filed a lawsuit in 2009 to hand out literature during the festival without renting a booth and won a court victory earlier this year to do so.

This year, Christian evangelist Josh McDowell is attending the festival again, signing copies of free Christian books in English and Arabic. Two years ago at Woodside Bible Church in Troy, McDowell talked about the “growing tide of Islam” in the US and about Christians can convert them.

Some Christian missionaries are walking around at the Arab Festival wearing T-shirts that read: “I love Muslims” on the front with a Bible verse on the back. They’re handing out literature that says Muslims worship a “moon-god” and should convert to Christianity.

The above article is from the Detroit Freepress