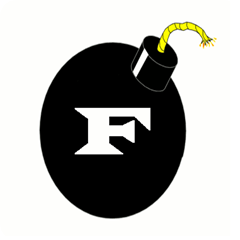 I just read an article in the Detroit Free Press (Yes we know how to read in Detroit) about a man who was kicked off his flight out of Detroit Metro airport for dropping the F-bomb (Story here).

I’m not going to say that he should have or should not have been kicked off, I was not there, but I am going to comment how we think. One comment of his struck me, he said:

"We use curse words just like adjectives. But the thing is, I never said it out loud towards him. He just happened to be right behind me."

Have we gotten to a time and age where cussing is expected? Do we really think its ok to use such words in front of our children? I have hear many a parent use the F-bomb much like they would you “I love you”.

The excuses I hear are basically the same “Oh it’s just a word, it has no meaning” and “That’s just the way I talk”. I had a friend who use to use the work every other word, “So my F**king boss said he was F**King going to cut my F**King pay, well F**K him!” So intelligent sounding…. And they worked in a church!

To me, the over use of bad words is a sign of ignorance. You hear it in todays youth, you read it on there Facebook and twitter postings and in the songs they listen to. Soon, I am sure, it will become the norm on primetime TV.  It already is the norm in the movies they watch.

Like I said, I’m no prude, I  use the word and have heard it. I don’t get all bent out of shape when it is used, but…. Is it necessary? I have been making an effort to cut down on and stop the use of such words. I find that the older I get the less “cool” they sound.

I think we, as parents and adults need to make an effort to show our teens and pre-teens that the English language does not need such words, that we can communicate just fine with out using the F-bomb every other word. I know that’s what I tell my boy… Does it make a difference? I don’t know, the youth are always hard to read and there peers have a major influence on them. But I am sure deep down the message is heard.

One thought on “The F-bomb”