Below is a poll question from the Pew Research Center. I find the question interesting. Based on my conversations with most of my friends I am not sure I would get the same response, most of my friends with in the faith are liberals and they have a basic feeling that the Catholic faith is just one flavor or Christianity, and any flavor can do the job. 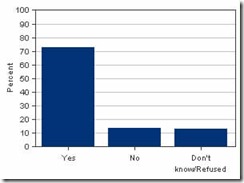 Subpopulation/Note: Asked of non-Catholics who have a religious affiliation and who said many religions can lead to eternal life.
Survey by Pew Research Center for the People & the Press, Pew Forum on Religion & Public Life. Methodology: Interviewing conducted by Abt SRBI, July 31 – August 10, 2008 and based on 2,905 telephone interviews. Sample: National adult. 2254 respondents were interviewed on a landline telephone and 651 were interviewed on a cell phone, including 262 who had no landline phone.

I know the question is not asking is the Catholic Church the only way to eternal life, but knowing my Catholic liberal friends and the simple fact that they will choose other faiths over the Catholic faith when ever they can, they would respond with a no or an I don’t know rather than a resounding yes.

It is a frustration of mine that I have had to deal with for years. For example one of my liberal friends and I were talking about Martian Luther and the whole reformation thing. I made the comment that yes, Martian may have had some valid points but the simple fact that he left the Church than rewrote parts of the bible and removed what he did not like discounts him in my eyes. And it has been discovered that he had a mental issue. Good old Martian was not of sound mind, at least not towards the end. You would have thought I just told her that her child was the spawn of satin! She went off on me, calling every name in the book and was offended like I have never seen before, in truth I found it funny.

For a second example I have another liberal friend whom I will meet for dinner every few month, we volunteered at the same Church for years together and have remained friends. Our dinners always revolve around politics, both secular and religious. This one particular dinner we were discussing the new Bishop of Detroit, and his “house cleaning” he was doing in the main offices. He was reorganizing, removing and moving everything and everyone. To me it was a good thing, something that truly needed to be done years ago, to her it was an evil thing, she saw it as a way for him to get rid of the truly “educated” (code word for liberal) people. As we discussed this current issue she made the comment that all the Bishop does is pray. The word pray was said in such a tone as to indicate that it was a bad thing, a taboo of sorts. I was dumbfounded, I had to reply except, and that is bad how? He r view was that when he needed to make decisions he would first go off and pray, so all he did all day was avoid making the hard decisions but using prayer as an excuse. Once again I was with out words, are we not suppose to pray? Are we not suppose to call on God and the Holy Spirit in times of need? And trust me Detroit is in a time of need.

I could go on and on with examples of how my liberal Catholic friends view the Church. The sad part is they are both involved in educating our youth in the faith. I pray for them often.

So the Pew Research question is fascinating to me. Knowing my friends if I were to ask the same question I would not get the same results. truth be told, I would not be able to get much of a response at all, they often times refuse to give yes or no responses for fear of making a judgment statement, who know who they may offend with a solid yes or no, it is much better, in there eyes, to remain ambiguous. Less change of offending people. They do not concern themselves with offending God, because the Liberal mantra is “Jesus loves you”, so they are fine.

Being ambiguous is a danger, we are warned about this in the bible:

16So, because you are lukewarm—neither hot nor cold—I am about to spit you out of my mouth.

Me, I believe in taking a stance, Yes or No, Right or Wrong, Up or Down. None of this maybe or I don’t know or what ever makes you feel good crap! God calls us to stand and deliver not to sit and wither. We do wither when we do not take a stance, when we do not firmly believe in our faith. Like a flower that is not given water, we too will wither away and die.

The liberal mind set is one that is programmed to avoid taking a stance, they view decisiveness and strong opinions as negative traits. It fills them with fear, a fear that they may have to actually believe in something, that they actually may have to accountable for their own actions. It is a deep rooted fear, one that is very protective of there host body. And when it is called in to action to protect them, it can get very nasty. I have witnessed this effect. The vale of fairness and open mindedness is dropped and the true liberal colors are shown. They are not the colors of the rainbow, radiating with the light of kindness and respect for others, but the color of darkness and shadows hiding from the light. It is a scary sight to say the least.